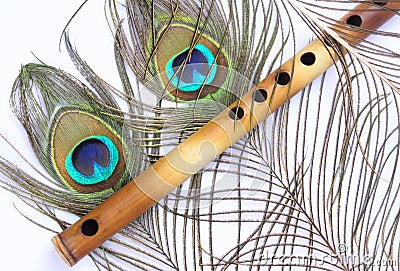 Music is inherent to mankind. The singer or artist tries to reach God through his music. Like all  other Indian classical Performing Arts, classical music too, is a journey of the Jeevatma or the soul towards the Paramatma or the Divine.

The human capacity for music has often been attributed to higher sources, and consequently, a whole body of mythology surrounding music has been born. The purest form of sound was considered equal to cosmic energy. As a result, music and religion were always closely intertwined. Indian music has developed through very complex interactions between different people of different races and cultures over several thousand years.

Some of the major Indian deities associated with music are Saraswati, Brahma, Vishnu, Shiva, and Lord Krishna.

Krishna, one of the most popular Hindu deities, has strong musical connections, especially as depicted in the Bhagvatam. The young Krishna of Vrindavan is always carrying a flute and playing mesmerising tunes Krishna a charming god is comparable to Apollo and the muses in Greek mythology .

The influence of mythology on Indian music has been undeniable and extensive. We do not just tell stories about our gods and heroes, but sing them, for music is divinity manifest.

Music is the prayer that every heart sings.

Digital Media and Artificial Intelligence -The Road Ahead